“Nothing About Us Without Us!” (Latin: “Nihil de nobis, sine nobis”) is a slogan used to communicate the idea that no policy should be decided by any representative without the full and direct participation of members of the group(s) affected by that policy. (Wikipedia)

What I aim in this piece is to explore the process of marginalization that excludes people from political, social, and economic opportunities. Of course, there are many forms of exclusion but my focus is upon the marginalization of those with disability, or at least a grotesque example of this.

Meritocracy seems to be a belief that is thriving amongst senior staff of disability support services. It is an atmosphere that seems to accompany many who tells us with their words that they are there “for us”, they have earned this elevated place by merit. But in the implementation of management policies another reality is at work making many of us wonder if they are there “for themselves”. But it doesn’t stop there in the management office. Meritocracy is a driving force of public policy — particularly when it concerns equal opportunities for marginalised groups of people.

Modern philosophy advocates this idea of merit. It is a concept often promoted by advocates of conservative ideology. It is a fruit of liberal humanistic beliefs. For us today, appeals to meritocracy will combine political beliefs and economic values in what we have come to view as neoliberalism.

I have given this much thought. I have come to the conclusion that public policy concerning people with disabilities and their involvement in society should reckon with merit and, by extension, equal opportunity. But policy also needs to include a strong dose of affirmative action. By this I mean, decisions on appointment in employment and also in public office should take into account the inequality that has prevented equally qualified but disabled candidates from advancing in previous times. Such policies should contain an element of ‘restorative justice’ reckoning with the structural injustice that has been in place previously.

Wikipedia tells us that the term meritocracy in its contemporary usage has its origins in satire. Initially, the term was used as a device to highlight a hypothetical future, where a dystopian society was divided based on their intellect and ability: and as such, people in this society whose I.Q. were below the standard, were deemed meaningless to that society.

Nevertheless, the meaning of the term meritocracy has evolved over the years.

Today, meritocracy is concerned with equal opportunities. More specifically, those who prescribe to a meritocratic way of thinking, believe that people who are able to demonstrate their abilities, should get better and higher opportunities to succeed in life. Therefore, the more you are able to achieve, the further you are able to get in society. This is a system that tells us that the outcomes are a reflection of the efforts put in by the individual. This is said to be, a system that gives everyone an equal chance.

There are several advantages to a system based on merit. One of the core advantages is that the main benefactors of a meritocratic society, are the people who have worked hard and become its beneficiaries. Furthermore, everyone would be tested in the same way, and would therefore be treated equally and on the same level. Supposedly, this would then create a culture where hard work is not only valued but is also expected — becoming an incentive for people to work hard.

In essence, meritocratic societies, propose a society that is open and fair. It is a society where there is justice and accountability. In an ideal meritocratic world, everyone who puts in the effort, is able to thrive.

In theory, meritocracy should benefit everyone. However, the theory has now become conflated with neo-liberal ideology. As a result, meritocracy is therefore driven by the market economy. This new wave of meritocracy focuses on the economic benefits reaped from personal motivations – by extension, our hard work and aspirations should result in moving up in wealth and class.

This is, however, a dangerous way of thinking. There are major downsides to this theory in its application. This is particularly true when we consider a meritocratic structuring of society as viewed from the perspective of people with disabilities. For instance, if success is seen as a result of hard work and determination, a reward for one’s merit, then poverty is perceived as the result of the person who is in poverty – by subscribing to this theory, those in poverty are told they are responsible for the situation they are in. inequality becomes guilt; it is merely the fault of the individual lack of motivation.

Equal opportunities are not evenly distributed to everyone in society. The most advantaged people are still given more opportunities to become successful, disproportionately so, and this has little to do with merit itself.

Meritocracy and people with disabilities

In theory, meritocracy proposes to eliminate barriers for people to “make it” in society. Merit becomes the main indicator for success. But when the idea of merit is infused with neo-liberal beliefs, the application of meritocratic principles means that the vast majority of people with disabilities are prevented from succeeding.

Meritocracy driven by neo-liberalism further drives a wedge between people with disabilities, and their equal access to pathways.  This brings me back to the by-line of this article: Nothing about us, without us. People with disabilities continue to live in poverty and continue to face injustice. This is only reinforced by the policies and regulations in place, despite the “feel good” appeal to (the smiley faces of) the meritocratic way of thinking.

The problem is this. It is basic. And it is simple to understand. People in the disability sector, particularly those who make decisions and policies, all too often fail to consider our point of view.

The underhanded messes of meritocracy

Nearly every politician has hurried to send out statements advocating that meritocratic ideals should be infused in everyday society. They claim people’s hard work will be rewarded, and everyone will get the same opportunity to prove themselves. Nevertheless, these claims are merely to get the moral high ground in the face of their political adversaries. What they fail to see, or perhaps what they willfully ignore, is how this system may only be advantageous to the people who are actually able to publicly and easily demonstrate their abilities. Such a political approach does not take into account other factors, socioeconomic status, disabilities and so on. Do these not potentially hinder any person’s ability to actually perform? As a result the political “me-too” support for reform of the disability sector, presents us with every likelihood that it only serves to further entrench our society into deeper inequality.

What used to be a satirical term has now become a tool through which those still trying to stand by neoliberalism are able to maintain themselves in power.

A real-life example of this is seen in the way the Australian Government’s budget has come into surplus because of its tightening of NDIS funds. Is this not a case of misappropriation by the Federal Government.? Four and a half billion dollars had been allocated for the NDIS, but this has not been spent for the NDIS, and instead it has been used to give the budget bottom line a smiley face.

In my opinion, this is a rather disgusting restructuring all under the guise of it being a complex accountancy matter. When you consider how Government spending has everything to do with responses to powerful lobbies it appears that powerless people with disabilities are simply going to wear the fact that we are society’s most vulnerable and impoverished group of people.

But what was allocated to us – with great fanfare, let it be remembered – should be spent on us.

Alias poop child Christina is a 3rd year Law Student at Monash University doing extremely well in all subjects achieving a distinction average. She also acts as Peter’s main Academic Support worker, where she has helped him achieve phenomenal feats.

I talk about social issues and disability in my book, 6 and a ½ Years on a Dunghill: Life in Specialist Disability Accommodation. 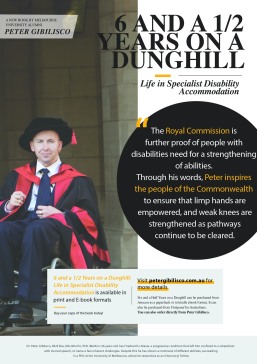 Many thanks to my friend and colleague Bruce Wearne, who has inspired me greatly in all my work and who has been my prolific ghost writer, my gratitude also extends to my phenomenal team of academic support workers. Daniella De Bruin whose brilliant and caring nature means so much to me. Also, Ikemi Ivara whose ability to command and control the situation with kindness. Lastly but definitely not least Mercy Ndegwa who’s continually teaching me how to be a better person.

One thought on “HOW LOW CAN SCOMO GO?” 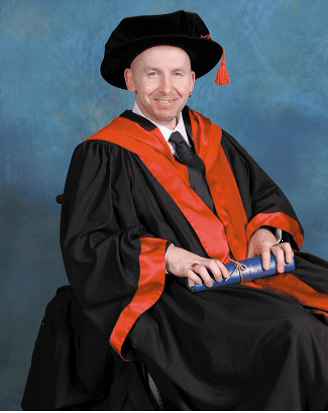 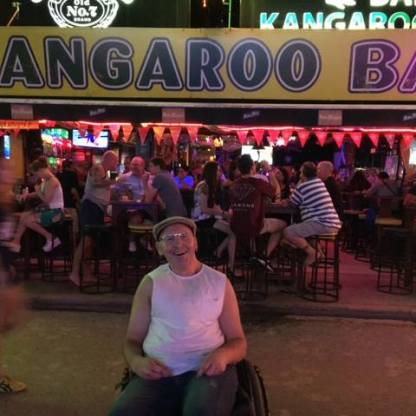